A FORMER Bristol City player has undergone a pioneering procedure to treat his piles.

Gerry Sweeney, who played more than 400 games for the team in the 70s and 80s, blames his match-day routine for the painful haemorrhoids he suffered in later life. The 64-year-old, who now works as a window cleaner, underwent the HALO (haemorrhoid artery ligation operation), at Spire Bristol Hospital.

Mr Sweeney, of Portishead, said: “I got caught short on the training ground once, so after that I used to make myself go to the toilet before going out to play, and I think that is where the problem started.”

He was part of the side that reached the old First Division under Alan Dicks and was a member of the famous Ashton Gate Eight, who agreed to have their long-term contracts torn up in order to save the debt-ridden club from going under in 1982.

Mr Sweeney was referred to the private hospital on the Downs after his piles worsened. He said:

I had the operation earlier this year and since then it has been a thousand times better. In fact, the piles have disappeared altogether and my life has returned to normal.

HALO is performed as a day case under a light anaesthetic or sedation. It only takes about 20 minutes and the patient can return to work soon afterwards. It involves cutting off the blood supply feeding the piles and has a 90 per cent success rate.

Before undergoing the HALO operation, it was very difficult to partake in all activities, including the simple things in life, such as hill walking. The procedure provided a quick and easy solution to a condition, which caused years of pain and sometimes embarrassment, which I had suffered with since the age of 15. I only wish that the HALO procedure existed sooner, as it puts your life back on track almost immediately after the operation.

There was a slight discomfort after the operation however this was far outweighed by the knowledge of the long term benefits I would gain after a full recovery. One week after the operation, I flew to New Jersey, USA, without problems and carried on with my life confidently and without restrictions.

This procedure has improved my life dramatically and I strongly recommend HALO to anybody who is held back by this unfortunate condition.

I would like to take this opportunity to say how thankful I am to have received the HALO operation. Prior to this my condition caused constant discomfort and had an adverse impact on my daily life, as well as restricting my ability to participate in more outdoor and adventurous activities in which I would like to have engaged.

I would thoroughly recommend that anyone suffering from the same condition should immediately go and get booked in for a HALO. The procedure was quick, effectively painless and had no significant residual pain or problems. I felt up to going jogging just 2 days afterwards. In my opinion the operation has been a complete success on all accounts.

Best Regards
(A much happier!) 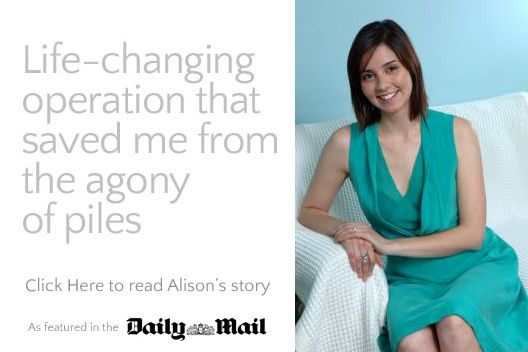